Now is a good time to buy silver, as the US silver Eagle sales in May surged, compared to the previous month. This is interesting, as precious metal sales and sentiment have declined in the West, especially in the United States. ever since Donald Trump was elected President.

Most precious metal analysts and investors, (including me) thought the Trump election win could be very positive for the gold and silver market. Unfortunately this is not the case, as demand for precious metals declined considerably in 2017. I assume, the general public actually thinks Donald Trump is going to make America Great Again.

My humble opinion is that this is a bad assumption, because with Donald Trump in the White House nothing has changed. President Trump I am afraid, could actually speed up the collapse of the US economy and financial system.

The fundamentals in the US economy continue to disintegrate. The economic bubble indicators have reached what took place in 2007. In addition, the US and the World Oil Industry, are loosing money and at the same time they have been cutting their oil reserves. It looks like the situation now, is worse than what took place during the 2008 Global Meltdown.

The reasons for that were due to the following.

1-There was an extremely large investment by a single wholesaler.

2-There was an increase in buying for the small investor, who took advantage of the lowest premiums in seven years.

3-There was a buy signal for silver by a group of respected analysts.

Although 2 million silver eagle sales in May are much less than they were last year, (4,498,500) this surge in demand suggests that the hype about the Trump presidency may be fading away. 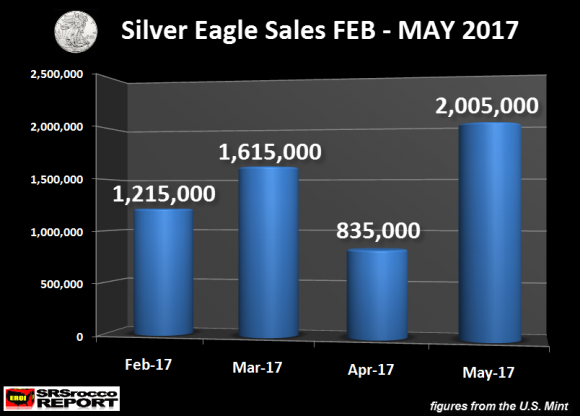 If the strong demand for silver continues for the remainder of May, we could see silver eagle sales reach 2.5 to 2.8 million ounces. This definitely lower than last year, but but it is a sign that the market is actually seeing something and it does not like at all.

It is a common secret that the Bond, Stock and Real Estate markets, are developing into the biggest bubble ever. When this bubble explodes, then god help us all? I do not think so! God will only help those who actually possess precious metals.