India’s Prime Minister the Honourable, Shri Narendra Modi launched the Indian Gold coin and the Indian Gold Bullion, back in November 2015.  Both will be of 24 karat purity and 999.00 fineness. 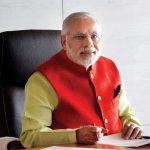 The Indian gold coin features the Ashoka Chakra on one side and Mahatma Gandhi on the other side.  This is a government promoted coin and is initially available in 5 and 10 grams, along with an Indian gold bar of 20 grams.  The Indian Gold Coin is carrying advance counterfeit feature