Gold prices had a strong close last week, finishing higher by 2.1% or $26, to close at $1,253 as of the final trade on the New York COMEX on Friday afternoon.

Even so, the price action continues to remain consolidative in nature. This is where we must remain steadfast in focusing on the primary patterns visible in the charts. Whereas a $26 weekly advance from $1,290 to $1,316 would carry the significance of an important breakout in our analysis, the same dollar advance still within the primary consolidation below carries less weight at this juncture. 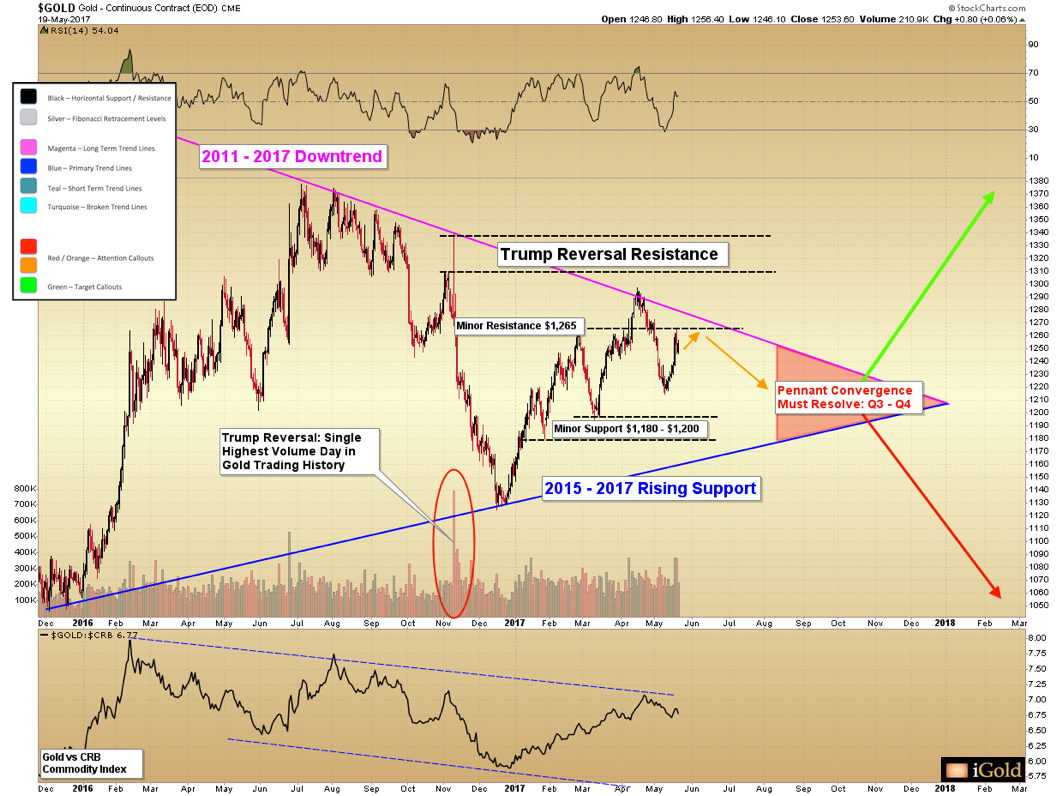 Gold hit a high of $1,265 mid-week on Wednesday, exactly touching the minor resistance level we have been indicating above, before backing off on Thursday.

Momentum indicators are neutral at this juncture, arguing that this week’s $1,265 will not have long-term significance beyond the next 2-3 months.

The specific limits of the primary pennant consolidation we are concerned with now are defined by the following converging levels. The breaking of one of these levels will bring the next major trend in the metals complex:

Gold Seasonal Factors – Will This Year Be Different? 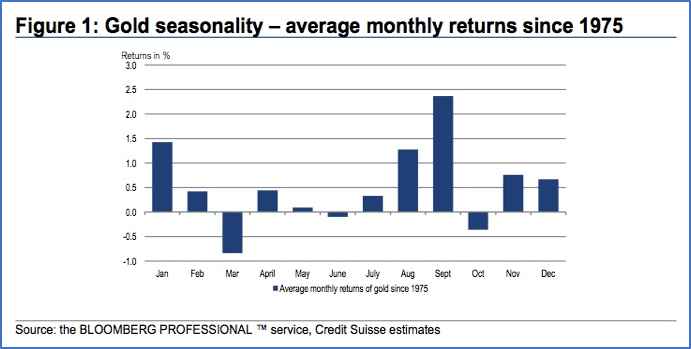 At right are the average monthly gains for gold on an absolute basis over the last 42 years. Note that March has historically been the weakest month for gold, with a seasonal low forming in late June or early July, less than six weeks away.

While September has historically averaged the largest monthly gain at 2.4%, even more significant is that the combination of August and September has been the strongest two-month period of the year over the last 42 years, at a combined 3.7% gain.

Of course, seasonal trends do not dictate the market every single year. We have seen gold halted seven times over the past 12 months by the long-term declining downtrend (magenta color) on the primary gold chart. This is one of the most significant technical battles we have observed in many years of studying the markets.

Here we find it important to pay attention to our own psychology – for it is likely representative of much of the precious metals community as present. If everyone is expecting gold to continue consolidating through the summer, will this then be the year that the market surprises most traders by breaking out ahead of the seasonal expectations?

Quietly, the gold to silver ratio (GSR) rejected the 76 level this week (in favor of silver) on Wednesday.

Of course, this ratio measures the number of ounces of silver required to purchase one ounce of gold. For new readers, recall that a declining GSR generally corresponds with rising prices for both metals, as silver tends to outperform gold during strong advances. Conversely, a rising ratio tends to correspond with periods of falling metals prices, as gold holds its value better in declining markets. 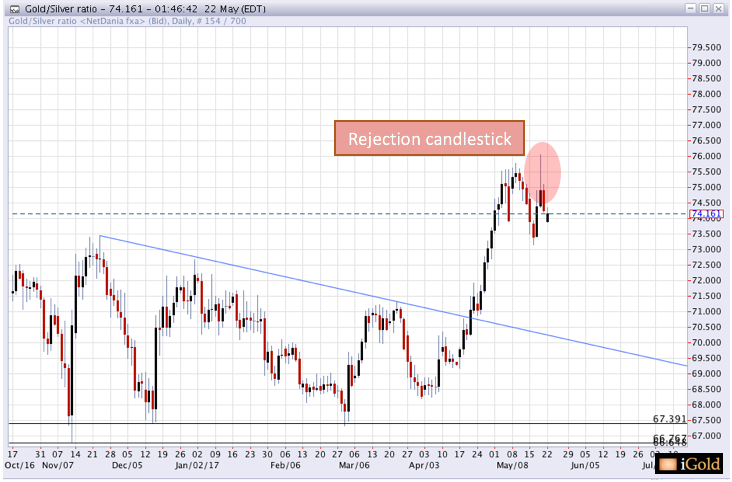 Note the long upper tail of the daily price bar for May 17. Using Japanese candlestick analysis, this day was a clear rejection of the previous highs near 76 for the GSR.

While the ratio still remains elevated above mid-2016 levels, we view the most recent advance as a counter-cyclical move higher, which looks to have topped out at 76.

Note that metals prices can indeed grind lower even amidst a consolidating GSR. However, the rejection and topping action observed this week was an important leading indicator, given the broader context in which it is occurring. 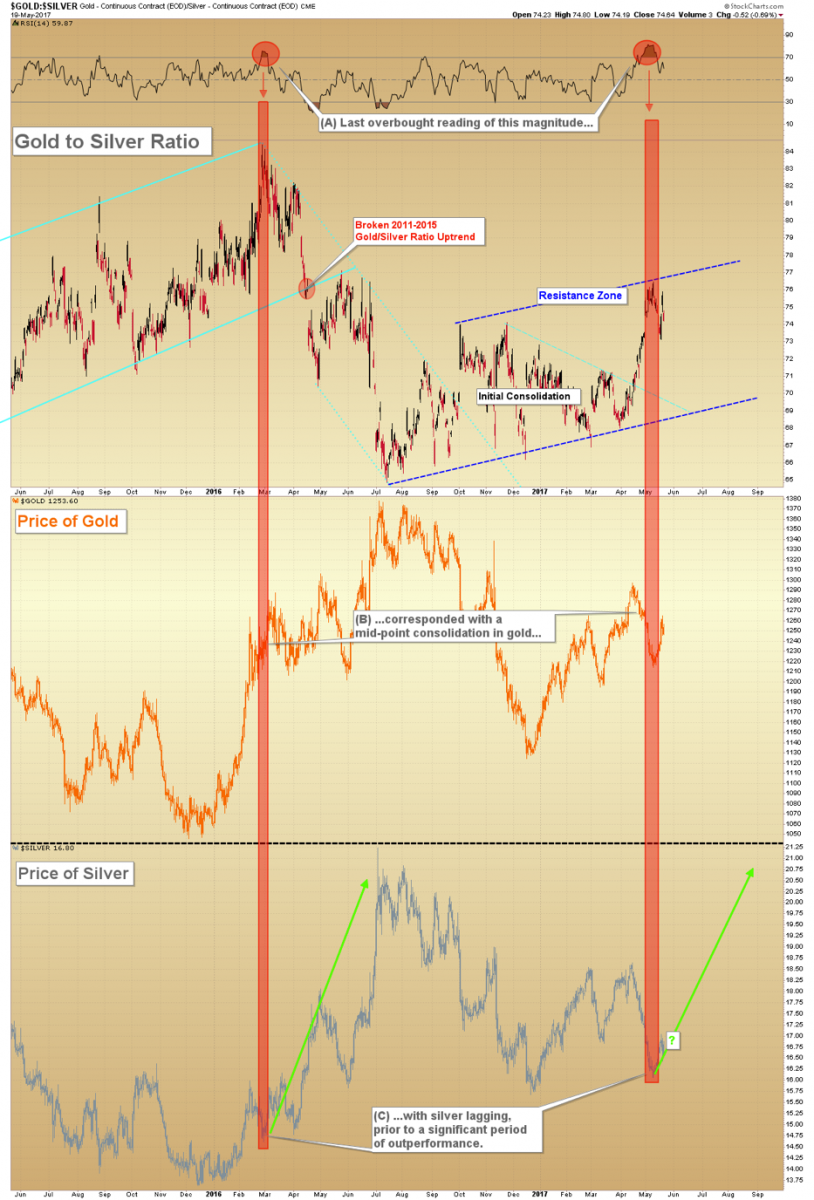 Let us focus in on the past two years of the gold to silver ratio, and make note of the past times in which gold has outperformed silver on such a relative basis.

At right we update our GSR momentum model, which has correctly alerted us to the most recent low in both metals.

Note that the only other overbought momentum reading above 70 on the RSI (top of chart) occurred in late February, 2016. This was just prior to the March – July advance in which silver largely outperformed gold while both metals surged.

Overbought momentum readings must be used with caution, because they can occur some weeks prior to the actual turning point in the underlying market. However, this is only the second signal of this magnitude that we have seen in the precious metals complex since the 2015 bottom, so it should be monitored carefully for hints of strength to come.

Gold prices remain in a mid-cycle consolidation after the strong advance seen in first-half 2016. Seasonal influences are shaping up for strength by August and September. The gold to silver ratio looks to have topped, signifying an important low across the sector. Precious metals investors should continue to monitor the ratio as a leading indicator, which will give us hints as to the direction of gold’s pending breakout when it occurs later this year.