The US dollar continues to show us signs of a significant long-term reversal lower in the making. As first proposed in January 2017, the dollar has now hit our initial lower target of 95.5 on the dollar index: 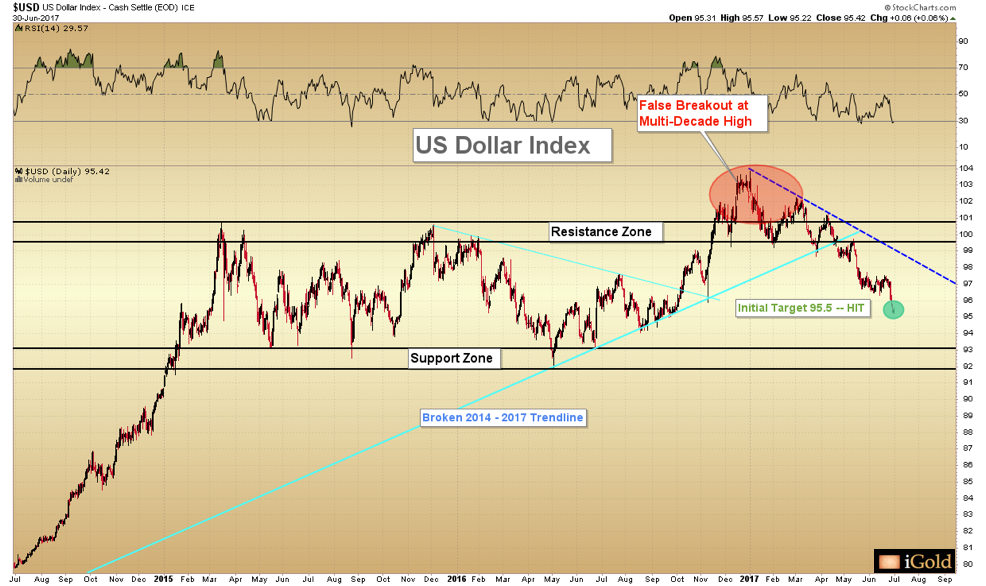 This target was derived from a measurement of the amplitude (4) of the false breakout above the 99.5 resistance zone (black lines) subtracted from this same level following the breakdown. It represents a liquidation of long contracts by those who purchased the US dollar on the assumption that Trump’s policies would overshadow any money printing by the Federal Reserve after the election.

We were on alert for the US dollar reversal starting in January 2017, as the currency continued to make lower lows after a major multi-year breakout. This was a warning sign – such immediate weakness should not occur in a strong breakout scenario.

Again, as of this week, the dollar has now hit our first target lower, at 95.5 on the dollar index.

First, please note that initial targets are just that: the first stopping point based on a technical measurement. We must use other forms of analysis to gauge the probability for subsequent movements.

Prepare For Dollar Bulls To Show Up

We suspect they will fail, as sellers are clearly present above 99.5 on the index. False breakouts at multi-decade highs tend to represent long-term reversal patterns.

Based on the deterioration in momentum, it is likely that the dollar is headed for its 2.5-year support zone between 92-93 as a next stopping point before any meaningful rally.

Visualizing a further drop into the support zone on the long-term chart: 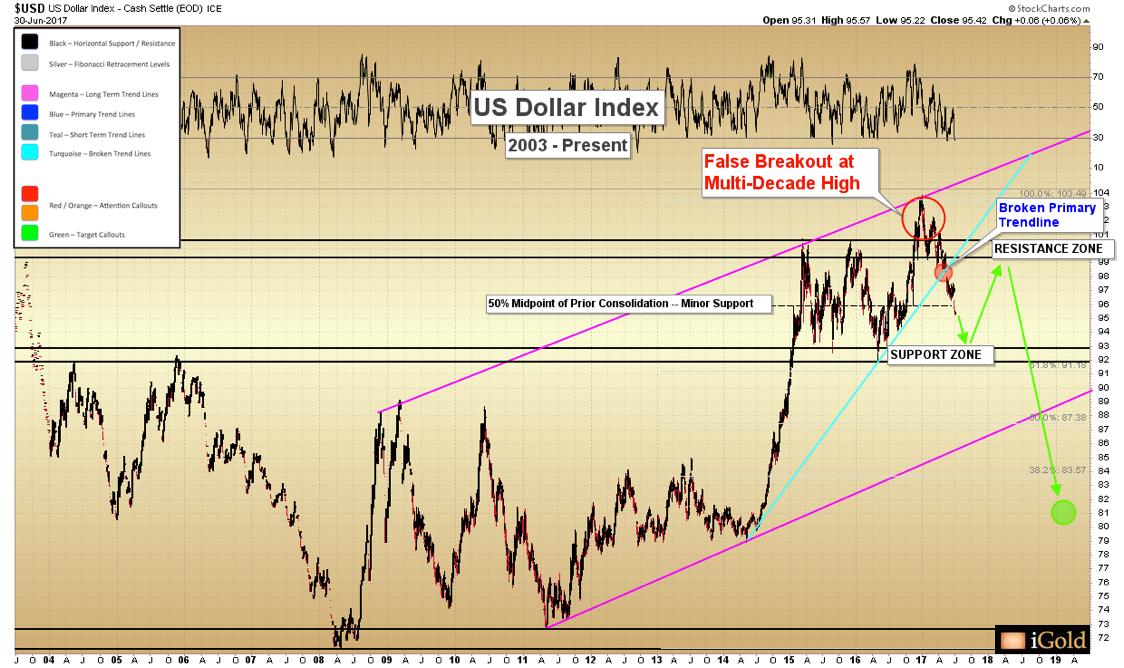 Although a significant bounce should be expected to occur as the 92-93 support is reached, even a test of this region is a bearish long-term signal, as it opens the door to a possible massive head and shoulders top on any bounce, illustrated by the green arrows above.

Our best assessment is that the dollar will fail to hold the lower range of the support zone at 92 after a meaningful bounce. At this point, there will be little in the way of support for the dollar aside from the long-term rising trendline (magenta color), which comes in at 88. The target on a failure of support at 92 will become 80.5, equal to the amplitude of the failed advance (11.5) above the support zone, subtracted from the same support zone. 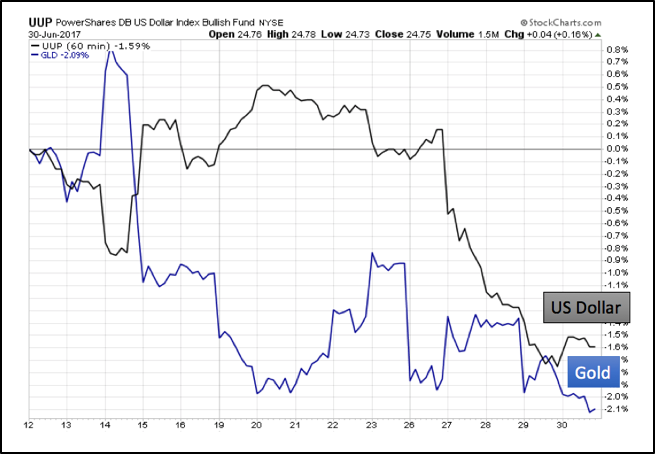 Unfortunately for gold, we are living through one of those anomalous time periods in which the US dollar and precious metals are positively correlated – but to the downside.

Throughout history, gold tends to have its strongest moves when the US dollar is losing value, as gold receives bids from those looking to protect their savings against a decline in the world’s reserve currency.

However, as we can see at right, especially since the Federal Reserve meeting in mid-June, both the US dollar and gold have moved in the same direction: lower.

This is largely a market psychology phenomenon. Presently, the Fed has the markets fully convinced that it is engaging in just the right amount of money-printing to keep inflation modest but to keep economic growth strong. As a result, investors are choosing to protect themselves from inflation through the rising stock market, but are seeing little need for “safe- havens”, i.e. gold and the US dollar.

This is where our outlook may be different from most analysts in the precious metals community.

We of course know that gold and the US dollar are not both equal as per safe-havens. One is a historic store of wealth that has lasted for over 5,000 years, while the other is a fiat currency which has already lost 97% of its value in the past 100 years.

However – we also respect that market reactions are primarily determined by the psychology of its participants at a given time.

We agree that the market – in viewing both gold and the dollar as safe havens to be sold simultaneously – is acting irrationally.

However, the market can stay irrational longer than many expect.

We have no desire to be right on certain fundamentals, but to get “trampled” by the market moving opposite to us.

To do so would be akin to simply ignoring an irrational mob of people as it approaches. Perhaps the people have no logical reason for their behavior – but if we ignore them as they rush toward us, we will get hurt nonetheless.

Large market players can sell gold simply because they trust that the Fed has everything under control.

Something must change in the market psychology to alter this belief.

Gold Not Acting As Safe-Haven? 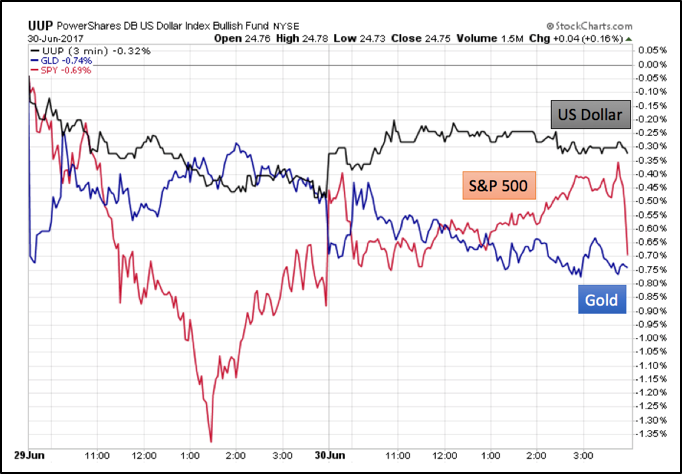 The last two days were especially noticeable in that gold failed to receive a bid, even despite weakness in both the US dollar and the broad stock market. At right we plot gold, the dollar, and the S&P 500 since Thursday:

There is an old investment adage which says: “If a market fails to move higher when it should, it is showing internal weakness.” (The implication is that absolute price weakness should be the next to manifest.)

This is the only way we can interpret the price action for gold recently. It is failing to attract buying on either US dollar weakness or stock market weakness.

If gold cannot move higher when traditionally-inverse markets are showing weakness, then when will it?

This is the question gold investors must ask themselves.

We are not bearish over the long-term. Irrational behavior can reverse just as quickly as it began.

But something must change as per market psychology to shake the precious metals out of their malaise. A trigger must present itself. We cannot say what that trigger will be yet – but we will absolutely see it on the charts when it occurs.

For now, subscribers continue to hold puts as protection in case of a more serious decline in the metals during the second half of the year.